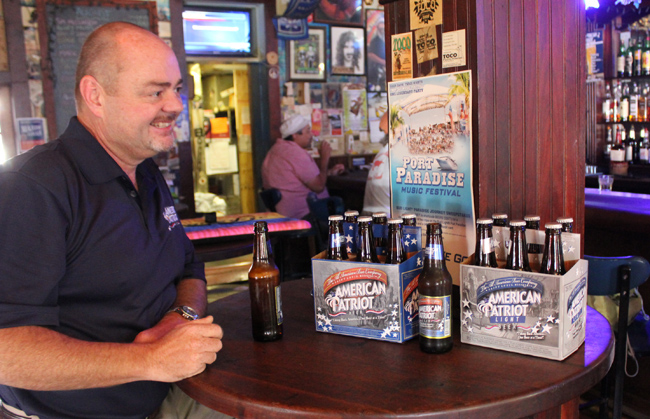 “Taking back American . . . One beer at a time” is the slogan for American Patriot Beer, the first beer produced by the St. Louis based All-American Beer Company.

A month ago, they released 25,000 cases of their American Patriot lager beer and light beer. The beer has flown off the shelves so fast, that they are already working on a second large batch to be distributed. And the crazy thing is they have only had distribution in the St. Louis, Missouri area so far. On their website  you can see within just one month, they are already in over 400 grocery stores, gas stations and liquor stores. Pretty Amazing! St. Louisans are so excited about this beer that on the American Patriot Facebook page, you can see fans are going to local stores and requesting their beer be in store and in the fridge.

I met with owner John Beal last week at the Shanti in Soulard to taste the beer and discuss the story of how American Patriot beer came about. When Anheuser Busch sold ownership overseas to InBev in 2008 Beal was “crushed,” just like many other St. Louisans. He started looking at other big name breweries, but found Miller and Coors were also foreign owned. So, Beal did something about it and started the All American Beer company. It took him three years to learn the beer business and to nail down the beer recipe.

Beal stresses that the most important message he wants to relay “Buy American. Help America’s economy any way you can. Stop giving your money so people overseas who are profiting off of Americans. Support your local economy and buy American made and owned beer.”

The actual beer is made from all American ingredients and is currently being brewed in La Crosse, Wisconsin. Why La Crosse, Wisconsin? Beal says he looked locally and flew his Cessna 310 plane all over the Midwest looking for a brewery that had the pasteurization, filtering and other equipment to brew the over 25,000 cases of beer they just released. His ultimate goal is to get big enough to brew not just out of Wisconsin, but also have brewing facilities in the St. Louis area and across the Midwest.

So let’s get down to the taste. How does this beer compare to a beer everyone knows, Budweiser? I set up a blind taste test with my husband, Mat, who has been known to drink a few Budweisers. 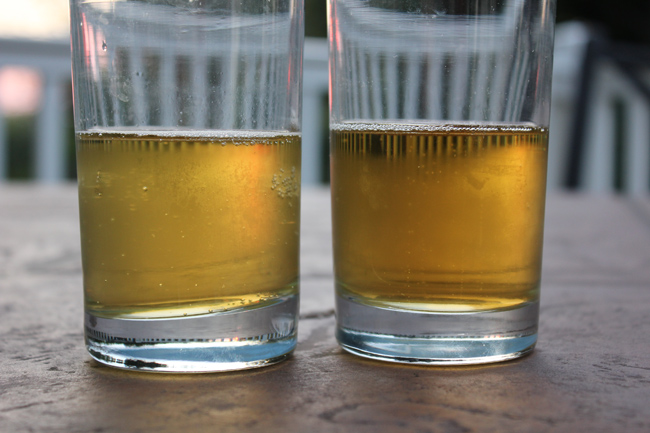 Smell
Both American Patriot Beer and Budweiser have a very faint smell, which is one of the reasons many people can easily drink a few.

Taste
This is a full bodied American lager with a crisp, clean taste. The first time I tasted the American Patriot Beer, I thought there was a slight citrus after taste. When I asked Beal about this flavor, he said “Some people do taste citrus, but it’s actually due to the corn yeast.” In the blind taste test, my husband, tasted no such thing.

But the real difference between these two beers is the ending. Budwesier has what I refer to as the “Budweiser Bite” – that note at the very end of your swallow that taste slightly bitter. American Patriot Beer is super smooth at the ending. Owner Beal says “One of my goals was to create a beer with a smoother ending. I went back and forth with the brewer 25-30 times to get that clean smooth ending. At first the brewmaster sent samples that were too sweet at the end, but I really did not want this to be a sweet beer but an everyday crisp clean beer.”

Once tasted, Mat knew which one was Budweiser, but which one did he prefer? American Patriot Beer. 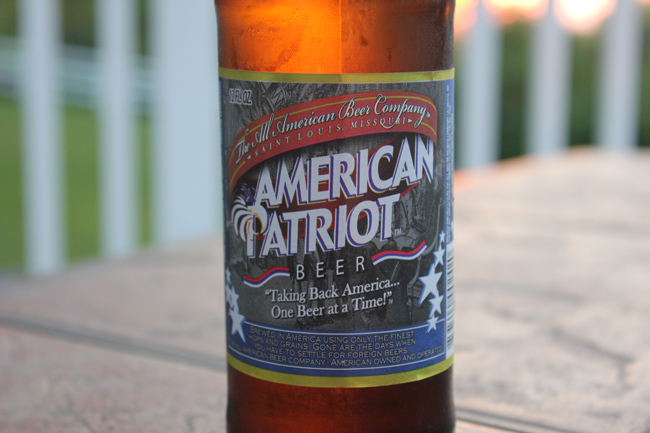 Drinkability
American Patriot Beer is an everyday beer. A float trip, BBQ beer and sitting on your back porch beer. It’s a beer you want to hang out with your friends and family and watch the game with. And with the tagline “Taking back American . . . One beer at a time,” I think Americans are really going to get behind this beer. The All American Beer Company is also working on cans, kegs and half barrels

The verdict? My husband says that its new favorite beer. And what did I think? I think its the perfect beer for those nights we stick around after sand volleyball for a beer. Have you tried it? What do you think?