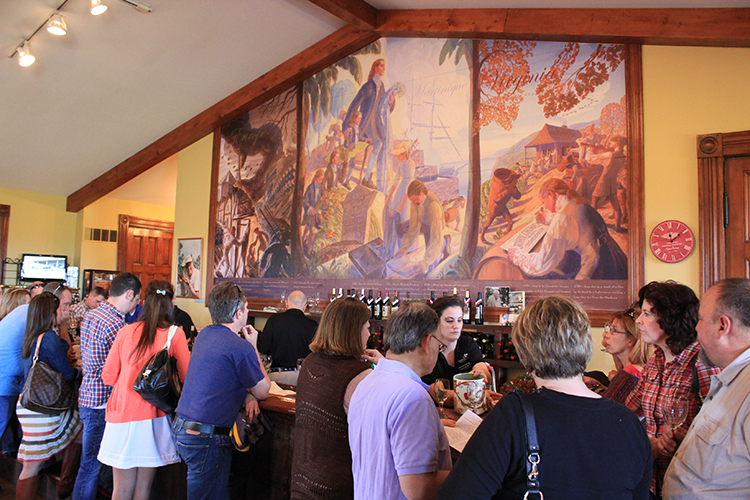 On a trip last fall I had the pleasure of interviewing Hank Johnson from Chaumette Winery in Ste. Genevieve, Missouri, for the below story that was featured in Midwest Wine Press. The fascinating thing about Chaumette is how their focus is primarily on dry wines (which is the opposite of many Midwest wineries), specifically the Chardonel grape:

In the tasting room of Chaumette Vineyards there is a large mural depicting the history of owner Hank Johnson’s family going back to 1680′s.   Johnson’s ancestors were Huguenots who fled France in the 1600′s.  Today, Chaumette winery has retained many French influences in a part of  Missouri that was the first French settlement west of the Mississippi River.

The featured wine at Chaumette is Chardonel, a hybrid grape that was developed by Cornell and Michigan State Universities and is the result of a cross between Seyval and Chardonnay.  When made properly in the Midwest,  Chardonel is very similar to Chardonnay.

Hank Johnson says some of his wine drinker customers cannot tell the difference between Chaumette Chardonel and Chardonnay.   ”Several of our supporters have brought our 2011 Reserve Chardonel, which is aged and fermented in French Oak barrels, to blind tastings.  Nine of out of 10 people think our wine is California Chardonnay.   The one person who guesses otherwise is usually the one who brought our Chardonel.”