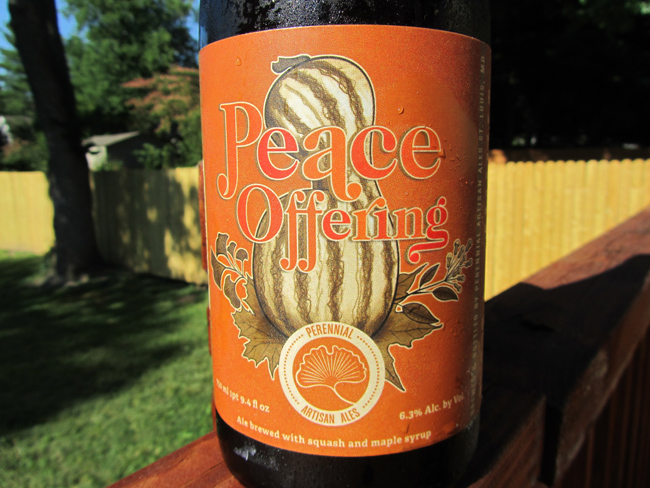 I had the chance to drink the beer “Peace Offering” by Perennial Artisan Ales this past week and loved the smell of maple syrup and squash, plus its woodsy finish.

St. Louis acquired another gem in its craft brewing crown when Perennial Artisan Ales opened its doors in October 2011.  Located in St. Louis, MO in the Carondelet neighborhood at 8125 Michigan Ave, the brewery is owned by Phil Wymore and his wife, Emily.  Before opening the doors to his own brewery, Phil was a brewer for Goose Island in Chicago.  The philosophy of Perennial Artisan Ales is, “To brew beer with the adventurous craft drinker in mind – focusing on hand-crafted, small batches of beer, using local, seasonal and organic ingredients as much as possible.”

Appearance:
As you can see below, this brew has a gorgeous caramel color with a cream colored frothy head. 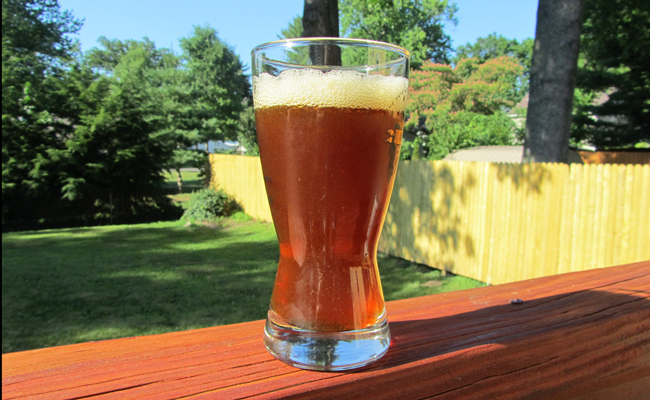 Smell:
The first smell offered a sweet aroma followed by the smell of leaves.  It was as if I could smell the squash and maple syrup right from the start.  I wondered if perhaps I was swayed by the description on the label.  The second sniff brought a number of spices, such as cinnamon and cloves.  The more I sniffed the more spices I could smell.  As I was trying to describe this to my husband, it hit me.  This smells like pumpkin pie spice.

Taste:
This is where it gets interesting.  Very little of the smells came through on the tasting.  There was no sweetness.  The spices came through quickly and disappeared just as fast.  There was a very small hint of squash at the end.  While the smell transported me to the kitchen during a Thanksgiving dinner, the taste took me to sitting around a campfire.  It was rougher and woodsier than I would have suspected.

Drinkability:
I would share this with a friend who appreciates good, creative brews.  Peace Offering lives up to the philosophy of Perennial Artisan Ales in creating beers for the “adventurous craft drinker”.  This beer is very good and I would drink it again, although I would insist on sharing this with friends who appreciate a fun and creative beer.  This is not a beer to drink mindlessly while watching a ball game.  This is a beer that should be savored and discussed.